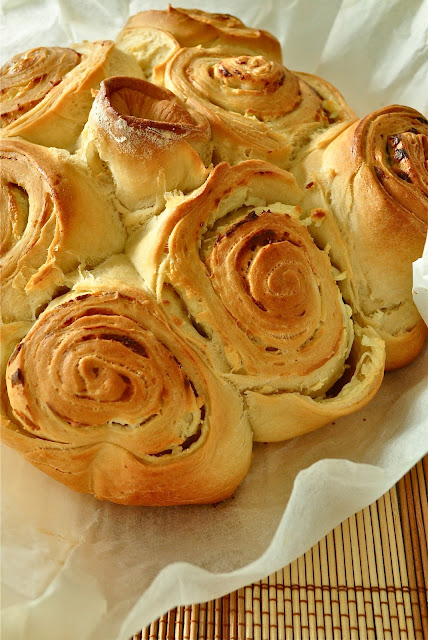 If you want to make cheese bread rolls look a bit more festive, arranging them in a pita form is the ideal way to achieve that. Separate the dough in three parts. Roll out the first and spread a little butter on it. Then roll out the second on top of the first and spread some butter on it as well. Finally roll out the third piece on top of the other two, making a 0.5mm thin rectangular dough sheet. Spread some shredded feta cheese on top and roll it in as a swiss-roll. Cut it in even 5-6 cm. pieces and arrange them with the cut part up in a baking form. Bake until ready. Enjoy! 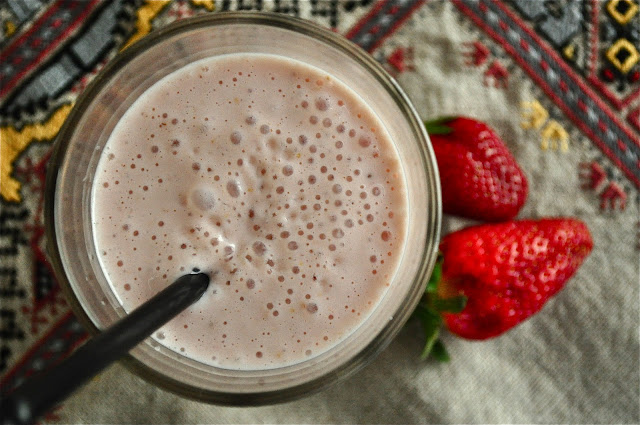 I really can't get over the fact that strawberries here taste nothing like the strawberries we grow back home. We used to joke that they need to be caressed by the sun in order to get that special flavor and sweetness, but now it seems as no joke to me. You fully understand the importance of sun light when you can taste the difference. Well, now I know, but what good can it do for me?! 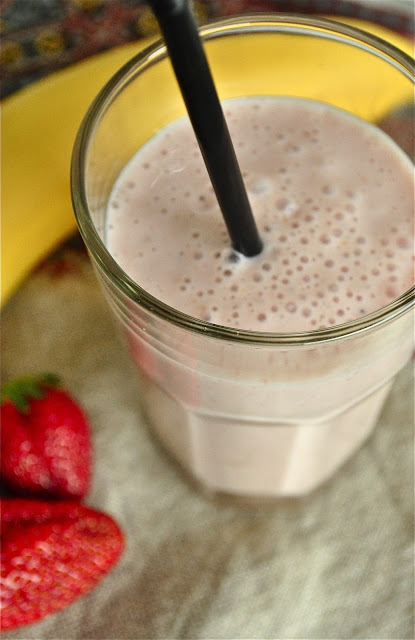 I guess one of the greatest qualities or skills (whatever you choose to call it) we humans have is flexibility. So, even though eating the strawberries is mostly unsatisfying, blending them with a banana and milk/yoghurt can make all the difference in the world. I prefer yoghurt as it gives the drink more texture (and I am a huge fan of yoghurt), but it works just as well with milk.

Eastern Orthodox Christians celebrate Easter today. I officially celebrate with them, even though I also took advantage of last week's celebrations. It's both exciting to have two holidays and a bit confusing, as it also steals from the uniqueness of the celebration. I myself am much happier when the holiday coincides and I can celebrate it together with my family and my Bulgarian and international friends. But it's a rare occurrence.

When I think of Easter, the picture that comes to mind is sweet bread (kozunak) and painted eggs. We don't have them at any other time of the year, so I'm always looking forward to eating a slice of warm sweet bread with yoghurt drink for breakfast on Easter Sunday and to paint eggs and later have egg fights with my family and friends.

This year, for the second time in my life I made my own sweet bread. Unconventional as it is, I opted for an Italian recipe that I had just discovered and here is the video, where you can learn to make this beautiful bread with cacao and raisin.

Mine turned out pretty nicely, although I was too overzealous with the cacao. Lesson learned! :) 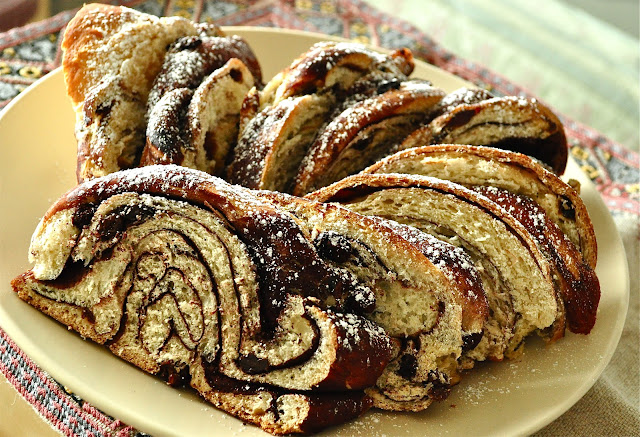 I also managed to paint a couple of eggs in different styles and now I'm heading off to a bbq where possibly none of them will survive. At least I'll have a picture to remember them by. :) 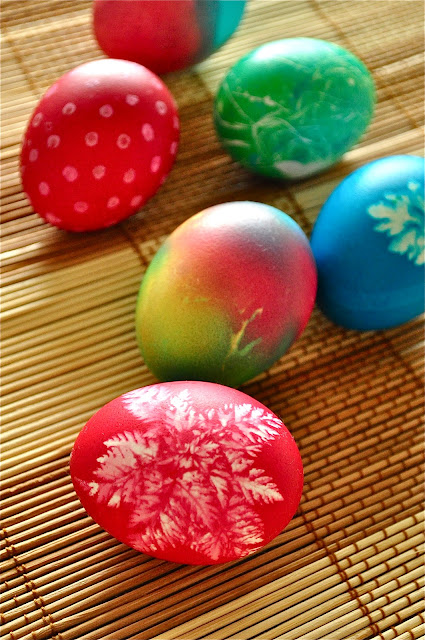 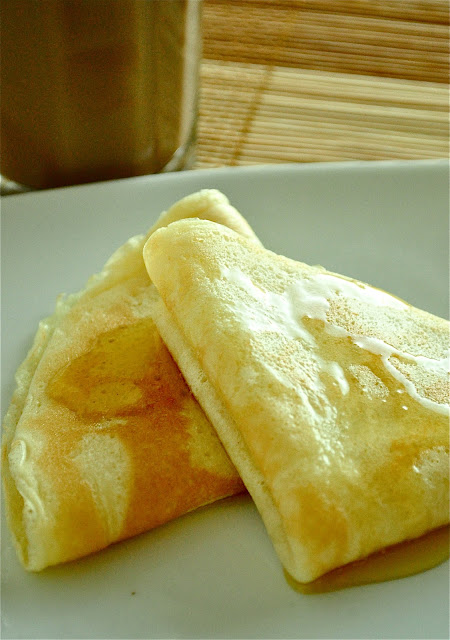 I imagine most of you would be surprised to learn that I've never made crepes until a few days ago. They haven't been the usual weekend breakfast at any point in my life either. I guess that explains why I only remember about them when I see the pictures of food bloggers' creations. In retrospect, I've always thought they'd be somewhat tricky to make as the first image that would come to mind is the flying and flipping crepes, inevitably landing on the stove/floor. It's not exactly encouraging. Finally I thought I'd try though.

Baby steps! That's what I've come to understand as the never failing recipe for achieving anything challenging. Let's face it. Crepes are challenging! So, I took the smallest pan I've got, pulled up my sleeves and began working on what turned out a dozen of delicious crepes. Thank you, TEFLON for making my life easier! :) 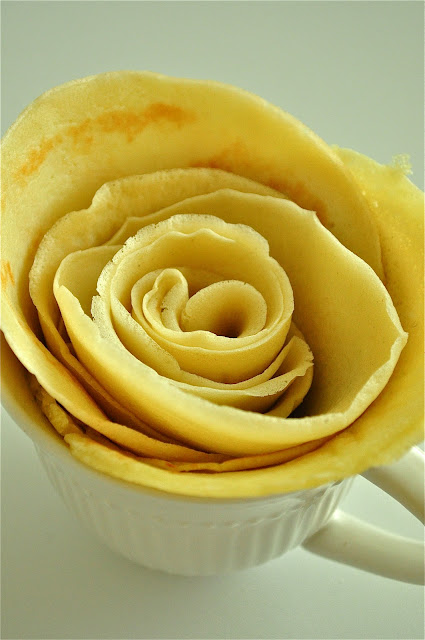 1. Mix all the ingredients until they've integrated well.
2. Heat a greased pan and pour enough of the mixture to cover the bottom of the pan, trying to keep the crepes as thin as possible. (Mine could have been thinner.)
3. Cook at a medium high temperature for about 1 minute and then turn the crepe to cook the top side.
4. Repeat the same with the rest of the mixture.

I had mine with honey (yummy), while also wishing for some fresh berries.

The picture on the right is a nod to the very talented food photographer and stylist Eva Toneva who originated the idea about rose crepes presented in cups. 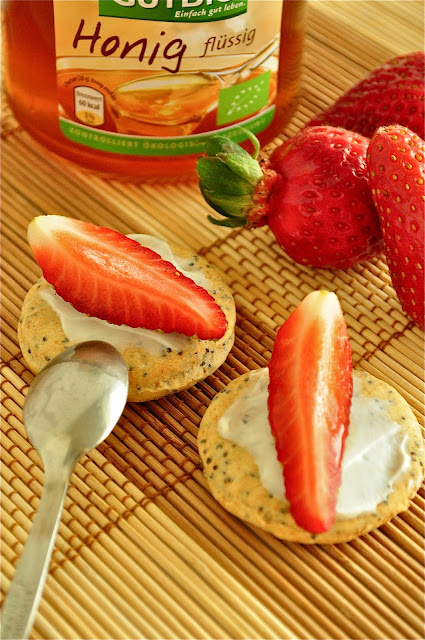 Lunch ideas? Yea, sandwiches or salad! Come to think of it, crackers fall into the sandwich category, if you jazz them up a bit with cheese and fruit. 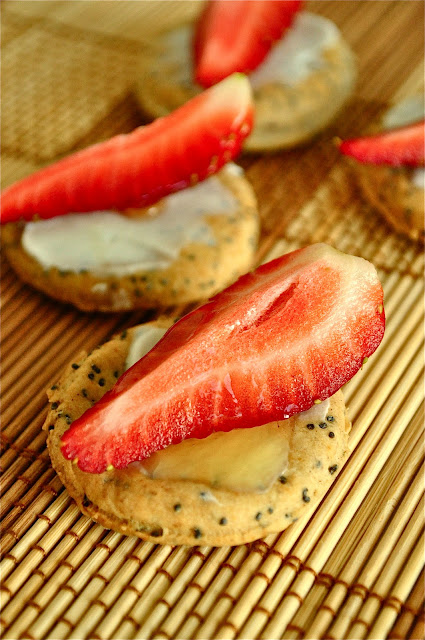 
1. Sift the flour and add the rest of the ingredients, except the water.
2. Start kneading adding as much water as you need to form soft and non-sticky dough.
3. Roll out the dough and cut it in whatever shapes you prefer.
4. Bake at 220 C until gold brown.


I added some cream cheese (ricotta is better), strawberries and honey to mine.

I realized I had inadvertently missed to show you a very cute picture in my last post, so instead of waiting for the end of the week (by which time I'm sure it'll be forgotten again), I'm stopping by for a quick post with a foodie note at the end.

While walking on the beach last week, we saw a man showing a pretty big fish he had captured to his wife (I presume), so she could take a picture of this glorious moment. I've seen this only in movies, so it definitely made an impression. Fortunately and in the spirit of a true paparazzi , my camera was still on (to be read as "always on"), so I quickly snapped a picture. :O 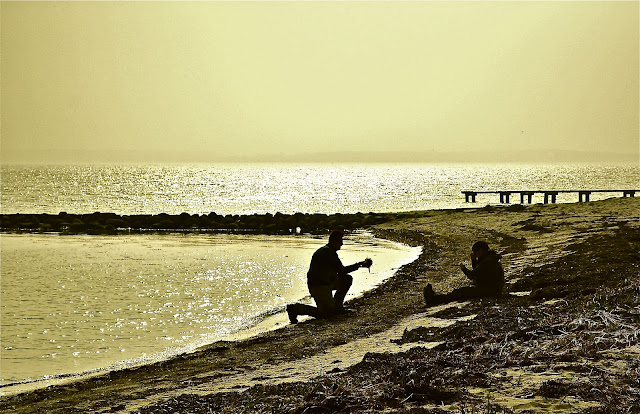 Inspired by the picture... I've had a few pieces of frozen salmon for a while now, so it was about time I made dinner with it. Mixed salad with greens, red pepper, carrot and maize added to the baked salmon bites with potatoes and herbs. I hadn't cooked salmon and potatoes together in aluminum foil, but they turned out delicious. 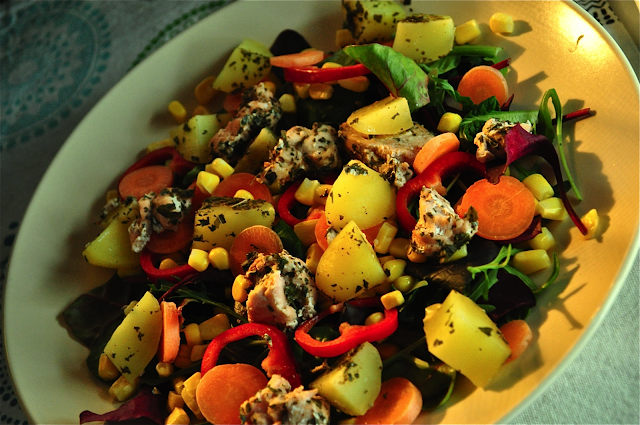 Email ThisBlogThis!Share to TwitterShare to FacebookShare to Pinterest
Labels: Salad

Normally, I'm an all-seasons person. So, whenever I get the question "which is your favorite season?", I stare thoughtfully for a few moments as if I'm trying to figure it out yet again and then answer vaguely "I like them all". That's pretty much how I feel about most things. There's just something specific I like about each thing (unless I totally hate it) and depending on what I'm looking for at that particular moment, I choose different things. Let me tell you, that can be exceptionally confusing, as I would go from one end to another. So, I'm known as a person of many minds. I keep it interesting for myself that way. Another thing I'm known for is getting off topic all the time. Like now. You'll see that a lot here.

Although I like all seasons, it's spring now and I'm just about head over heels with it. After the mild but dark and silent winter, every time I hear the birds in the morning, I get butterflies in the stomach. The colors are still pretty dull and uninspiring, but you can feel it in the air... life! So, now is the time to start with the long walks and that's just what I, my sister and a friend did on Friday. Fabulous! This is why I'm also showing you a few pictures from our walk.

The moment I see a duck, a swan or a rabbit, I forget about any of my companions and go to look and photograph them. This time I actually managed to follow my dad's advice and approach two ducks with slow and fluid movements. They still didn't look too trusting at me, but at least they waited until I was real close to jump in the water. 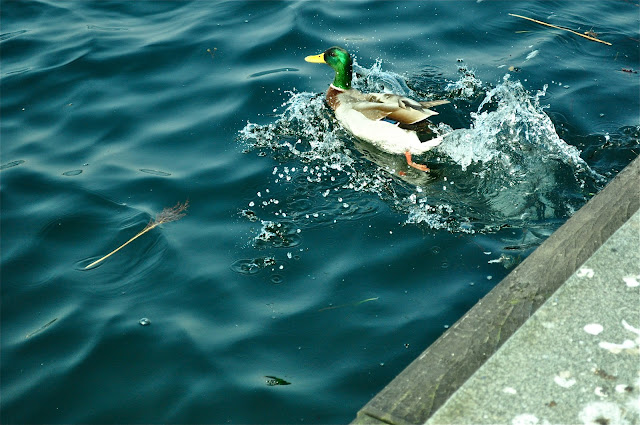 Even though for the most part the day was sunny and warm, by the time we were getting back from our walk, it changed so quickly and drastically, that I felt like I was transported in an alternate version of that day. I have to say that's one of the things I like most about spring though. It keeps surprising you.

Once I saw the approach of the boat below, I ran towards the beach, so I could take a picture of it in this mystic weather... did so too. But what I connect this moment with now is the scene that followed. Just as I was finished taking the boat picture and leaving, I saw a guy with a camera quickly approaching the rocks in front of me and immediately taking a sniper's position to photograph that same boat. You always know when you see a keen photography enthusiast! 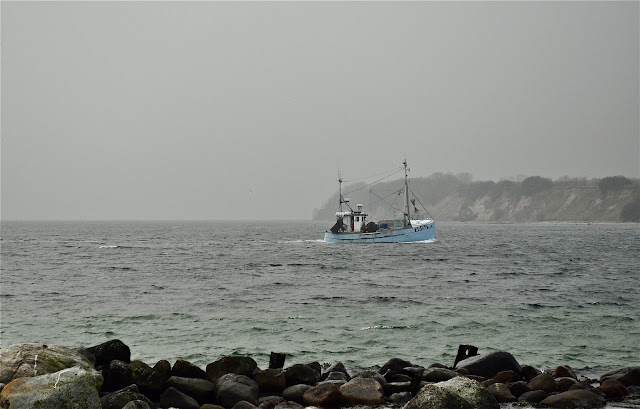 Moving on to food!

We realized that there is a new season of a Bulgarian reality show called "The cherry of the cake". Every week five well-known people are chosen to cook for each other during the week, each of them hosting a dinner for the rest of the participants. It shows the entire process of selecting the dishes, preparing them and hosting the dinner, all the while being entertained by the host's stories. A professional chef also offers comments about how the food is being prepared and gives suggestions for improvements. It's very entertaining and educative, which makes it perfect for my taste. So, while watching an episode of it, I got really annoyed with one of the participants, who constantly commented on what she wouldn't eat. So very picky! Then I realized I'm kind of like that too, which is something I haven't really considered as upsetting until now. This means, I'm gonna be working on my attitude towards some of the undesirable foods and hopefully I won't find myself annoying before long.

Today, I enjoyed an hour of jogging which meant that I needed something lighter for lunch afterwords. I've noticed how after exercise I can't eat anything for about an hour and then suddenly I feel starved and light-headed. Not good! However, I've found the perfect energy booster and that's fruit yoghurt smoothie. I'm a big fan of blueberries... always have been, so I go for them any time I can. That kind of makes me nostalgic about the good old childhood, when I'd go to the mountain with my parents and pick berries all day long, while shouting at the echo "Grandma bear, come here" (sounds better in Bulgarian...hehe). 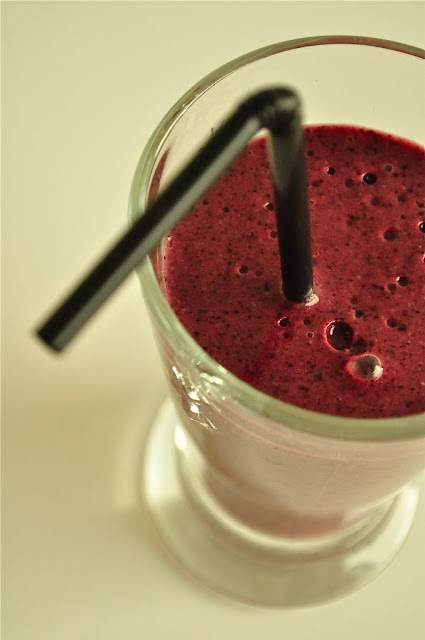 When making smoothies, I never follow recipe proportions. Everyone has a preference to how dense or liquid they want it and which ingredients they want to taste more of. So, I'm just gonna say that I made mine with blueberries, banana, yoghurt and water. Well, the blueberries dominated certainly. It disappeared faster than it came about! :) 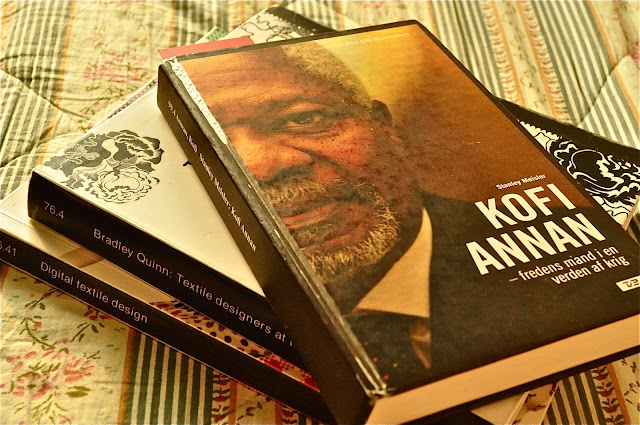 On a visit to the library this week, I accidentally spotted a book on Kofi Annan and I immediately thought I want to take it with me home. It's in a fairly understandable Danish, which makes it all that much more interesting for me and I'll share what I thought of it when I finish. I also got some books on textile print design, which is something I'm very interested to learn. I did some research on it during Christmas and it could be possible to also take a course on mixed media and digital print design in the summer, if I decide that I want some formal guidance. The best part of the course is that you get some feedback and notable exposure, so it's definitely something worth considering.

It's too late, so I cut this post short of the Danish version. :/